Looks like were through the worst of the storms for the week! Saturday and Sunday both look like great weather to be on the river. Small chance that storms could pop up Sunday but it is always best to be prepared just in case.

The river level will be rising gradually through out the weekend because of the rain we've been getting up north. Choose a sandbar that is well out of the water and pull boats up high from the river edge.

There is a chance of some scattered thunderstorms coming in tomorrow. When and where these thunderstorms will come in is still unclear. It is possible we wont even get anything come through this area but if you are getting on the river tomorrow it is best to be prepared for some rain!

The weekend forecast is looking pretty good so far for some overnight trips!

Some storm fronts have started to move their way into Wisconsin. So far it looks like Thursday might be the most likely day to get some thunderstorms however these forecasts change very quickly. What area these storms will pop up and when are still up in the air. Currently it seems most of these storms will be north of our stretch of the river. Friday and Saturday are looking pretty great for being on the river but we will keep an eye out and post updates as the forecast becomes more concrete.

WOOHOO! River levels have finally settled back to normal and the forecast is looking promising! Only a slight chance of a storm early Saturday but it looks like it will have passed over by the time we start putting boats on the river.

See you out there!

Water levels have finally started to drop up north which means we'll be up and running by Monday.  Sandbars should be back in significant numbers by Tuesday/Wednesday.

8/11/21 Evening Update: Oof.  For a few sweet hours it looked like everything was coming together.  Unfortunately, a front came through today that kicked off a lot of rain further west than forecast which put it right in the heart of our watershed.  Water is now shooting out of the dams upstream at a significantly higher rate than expected and it's more than enough to keep us off the river Friday morning through the weekend (we needed to see >12kcfs on the graph below).  For those of you that were still holding out for trips on Friday, Saturday, and Sunday - you'll get a cancellation email with your full refund sometime tomorrow.  Wish it would have worked out!

8/11/21 Morning Update: Starting to see that drop come in at Castle Rock.  It's not there yet but certainly heading in the right direction and will definitely shorten up the chart that's currently forecast.  Friday trips are still pretty unlikely to go out but I'm up to an even 50/50 on Saturday (official call for Friday comes tomorrow mid-morning one way or the other).

8/9/21 Sandbars are going under today.  Still TBD if they'll be back for the weekend.  Friday is looking unlikely, but Saturday is plausible (though still probably a little worse than 50/50 odds).  Really hoping this works out because the weather forecast this weekend is downright perfect for river camping.

At this point I'm watching the data out of Castle Rock because once that drops below 10-12kcfs it'll correlate with our sandbars coming out 36-48 hours later (e.g. a drop to this level by ~9am Thursday would make Friday trips doable, a drop by ~9am Friday would make Saturday trips doable).  River levels up there are currently peaking so it's really just waiting to see when they start to come down.

The river forecasts have been getting revised down a bit the past few runs and I think we'll see the tail end drop off much faster than currently charted which is why I'm not ruling anything out this early in the week.  River forecast updates happen most days at ~8am and 8pm so keep an eye on it over the next couple days. 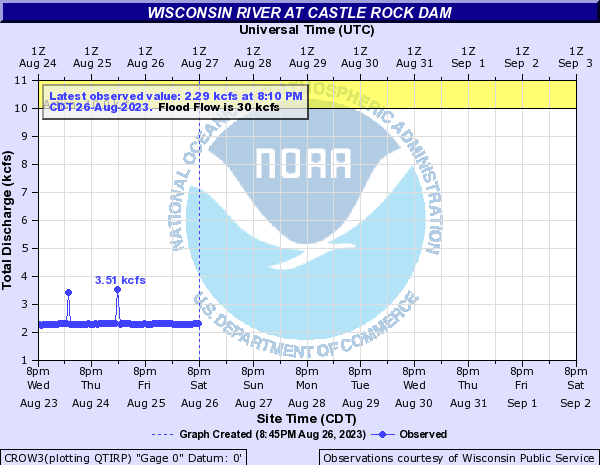 With all of the storms moving through this past weekend we've picked up a substantial amount of rain statewide. This rain is now making it's way into our watershed and will drive water levels up above sandbars sometime Tuesday into Wednesday. I'd expect this to resolve in a 4-5 days though that's dependent on where today's rain falls as we still have a couple more active fronts moving through. Luckily those currently appear to be staying south which means I'm still optimistic about sending trips out this weekend. It's still early in the river prediction cycle so I expect we'll see a lot of flux over the next day or two. It's currently very high but I wouldn't be surprised if that high water period isn't shortened up a day or more. At current water release numbers up north, overnight trips are off the table from Tuesday until at least Thursday.  Day trips may be doable but there will be very few places to stop while on the water. We like to see 13.5' or less on the graph below.  Forecast updates typically happen everyday at ~8am and 8pm +/- a couple hours.

Well, The forecast changed overnight and we are expected to get some heavy thunderstorms starting around 10am today that last until around 1pm. Heavy rainfall and even some hail predicted and we may even get some more storms tonight. An email was just sent out regarding conditions as well. Feel free to respond to that, or text our number, if you would like to cancel your trip for a full refund since conditions are less than ideal. If you would still like to go on your trip we will still send you out just be prepared for heavy thunderstorms for today and tonight.

It looks like we will probably get some scattered thunderstorms sometime on Friday. The severity of the storm seems mild but we still recommend reading up on the thunderstorm safety page under the River Safety tab just in case!

Sunday looks like thunderstorms so we’ll keep a close eye on that forecast throughout the day.

It looks like we will probably get some scattered thunderstorms sometime on Friday. The severity of the storm seems mild but we still recommend reading up on the thunderstorm safety page on our website just in case!

Sunday looks like thunderstorms so we'll keep a close eye on that forecast throughout the day.'