It would appear we’re about to pass through Third Winter (one of Wisconsin’s 11 seasons) this weekend as snow is in the forecast followed by a week of rain.

All of this cold weather has kept a decent amount of snowpack in the northern reaches of our watershed and we’re about to get a ton of rain.  This is to say that while the river is currently near record low levels for this time of year, I don’t expect it to last. 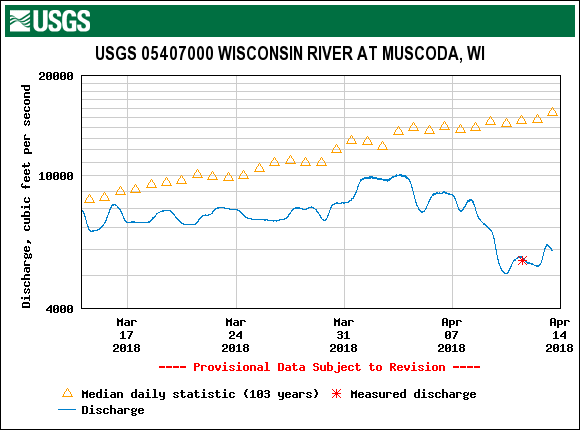 Once we finally get warmer and the spring rains kick in we’ll see water levels shoot up pretty quickly.  I don’t have a ton of data to go on but anecdotally, I imagine we’ll see peak runoff happen around the end of the month and if we get one or two rain storms a week somewhere in the (relatively large) river valley we’ll see waters stay high a little later into Spring than is typical.  Though to be perfectly honest, I’m maybe 60% confident that’s what’ll happen.  I thought last year was going to be a great start to the season solely as a reversion to the mean from the high water the prior two seasons but then we lost 6 weeks to flooding including Memorial Day and 4th of July weekends.