First of all, have you guys seen the weather forecast? Freakin' amazing! Sunny, hot, not humid, minimal chance of storms, and low winds into the next work week. I don't think that's happened yet this season. As for water levels - little bit of rain today but didn't seem to be enough to cause any issues. There are a decent number of sandbars out currently that there shouldn't be much crowding outside of a few hot spots. As soon as the Baraboo River drops we'll see a ton more sandbars (likely Friday night or Saturday morning) so the weekend outlook is looking down right summery where there might actually be more sand than water (wouldn't that be a pleasant change of pace!). Ryan
Read More >>

Today looks like it'll be about as high as it goes and the reports we've heard back were all positive. Water levels at most points upstream are receding and with the dry forecast we should be out of the woods. Water level outlook above Portage in particular has been cut in half with a further reduction coming out of Castle Rock. It's still rough going for those downstream of Lone Rock/Gotham area but above that there are plenty of sandbars (i.e. us). Anything in the Prairie Du Sac to Lone Rock corridor (including Sauk City, Mazomanie, Arena, and Spring Green) won't have any issues with flooding on the Wisconsin River.
Read More >>

Less than 2" of rain fell last night. I don't know if that's good or bad, only that it could have been worse. We did see the dam at Prairie Du Sac come up 2kcfs which wasn't unexpected and I believe it's now leveled off around 12kfs. To put that number in perspective, 15kcfs is where we start cancelling trips. [kCFS = Thousand Cubic Feet per Second of water, 1 CFS = 7.5 Gallons per second] It's always hard to know what exactly is going to happen with local rainfall. We have access to river gauges at Muscoda below us and Prairie Du Sac, Portage, and Wisconsin Dells above us plus a few other spots on larger tributaries (Baraboo, Lemonweir, Black Earth) but because the rains happen so close it doesn't really have a chance to show up in the gauges at or above the Dells. That means our usual 2+ day notice on river levels gets fuzzy and I have to start doing mental math. For example, our current 4 day outlook is great. The most important dam at Castle Rock has been holding steady all week at ~5kcfs. That gives us enough room for 10kcfs more water between Castle Rock and Spring Green. Following down the river at Wisconsin Dells we've also been holding steady around 7kcfs which makes sense given the Lemonweir dumps into the Wisconsin above this gauge and adds just over 1kcfs plus the smaller streams and creeks. Coming another 12 hours downstream we hit Portage. There aren't any major tributaries between the Dells and Portage so I'd expect to see very similar numbers - in fact right now they are separated by .2kcfs. This is where it gets fuzzy. We've still got ~8kcfs of room to work with. The Baraboo River comes in below Portage and has a fairly large drainage area. This is also where we're getting into all of the recent rainfall. The gauge near where the Baraboo drops into the Wisconsin is currently ~3.5kcfs. This will likely go up to 4 or 4.5kcfs but that's still a long way from our 8kcfs of capacity. Now we come another 12 hours downstream to the Prairie Du Sac dam. This is where our longest overnight trips start and is just over 12 hours upstream of where all trips finish. As mentioned above, the dam at Prairie Du Sac is now running at 12kcfs (5kcfs above Portage) which includes most of that 3.5k from the Baraboo River as well as the runoff from the immediate area that you'll see immediately following a rainstorm. I expect the contributions from the smaller tributaries to fall off very quickly - the gauge at Black Earth creek is a good proxy for this given it's close proximity to the river. Looking at Wednesday's massive storm, the creek went from 60 to 600cfs in less than 12 hours. Less than a day later it was almost back to 100cfs. The Baraboo is going to move slower both going up and coming down but for the most part, I believe that will be a pretty close match with the small tributaries falling off in time with the rise in the Baraboo. All of this makes me pretty confident our 3kcfs of remaining capacity is enough to ensure we won't have any issues losing sandbars tonight. Going forward it gets a little more difficult. There's a chance that all of the small local streams combined with the Baraboo River could continue rising up to that 15kcfs cap on Monday or Tuesday. I'm still waiting to see the latest prediction out of the Portage gauge later this morning, and especially this evening, to see where the real professionals believe the river will crest. There's just too much variability to make any kind of prediction for midweek. That said, my feeling is that we'll be okay if the amount kicking out of Castle Rock holds steady (and I think it will based on their lack of rainfall). Ryan
Read More >>

Our "current river conditions" graphs are a little misleading as they measure water levels 30 miles downstream of where all of our trips end. The local rainfall that we got is filtering in through all of the tributaries and the vast majority of that increase is happening at or below our location which is why you're seeing the graph spike straight up. In particular, both the Pine River and the Kickapoo River dump into the Wisconsin below Spring Green whereas we've really only got a small handful of streams worth a couple hundred cubic feet per second (the Pine will top several thousand and the Kickapoo will likely top 10,000cfs). While the water is certainly higher than usual, we still have plenty of sandbars on our stretch between the dam and Spring Green. The best number to look at is the Prairie Du Sac flow rate (seen on the "next 4 days" tab) for a more accurate idea of what's happening in our immediate area. This reading is taken a mile upstream of our 25 mile trip. The dam output is responsible for 85%+ of our water levels and right now it looks fine upstream for at least the next few days. Things could get interesting in the middle of next week but that'll depend on what happens with the rainfall tonight. All this is to say that trips are happening this weekend and I'm confident there will be sandbars to camp on. Of course I could be wrong so it's still worth sticking a branch or paddle at the edge of your sandbar and checking it against river levels every few hours. Ryan
Read More >>

We’ll survive the weekend! All trips are going out.

Lots of rain again locally and to the south of our watershed. I don't envy some of you guys down south, especially with more coming. For us, while we did see an immediate rise in local water levels, it's an overall small impact on our trips compared to the middle third of the river valley. We're still above a fair amount of the local rainfall by the time it gets into the Wisconsin River after it makes its way through all of the tributaries. Massive rainfall in the central part of the state is what really makes an impact because by the time all of that rain has filtered downstream into the Wisconsin River, it gets to us as one big wall of water. I'm always happy to avoid the wall. All of this is to say that while yes, it's wet, and yes, we're higher than usual, and yes, it's gonna rain again Friday night, we're still looking good with both weather and sandbar availability for Saturday and Sunday. Friday during the day also seems to be clearing up though rain/storms look unavoidable overnight. On the brightside, even if we get a ton of rain Friday, it won't have time to really get into the system and wash us out until later in the week (but we'll cross that bridge if we come to it). On the picture below, we're at the tip of the white arrow. The faded white areas are all part of the watershed for the Wisconsin River. Draw a horizontal line across La Crosse and anything above there is what I usually worry about. -Ryan 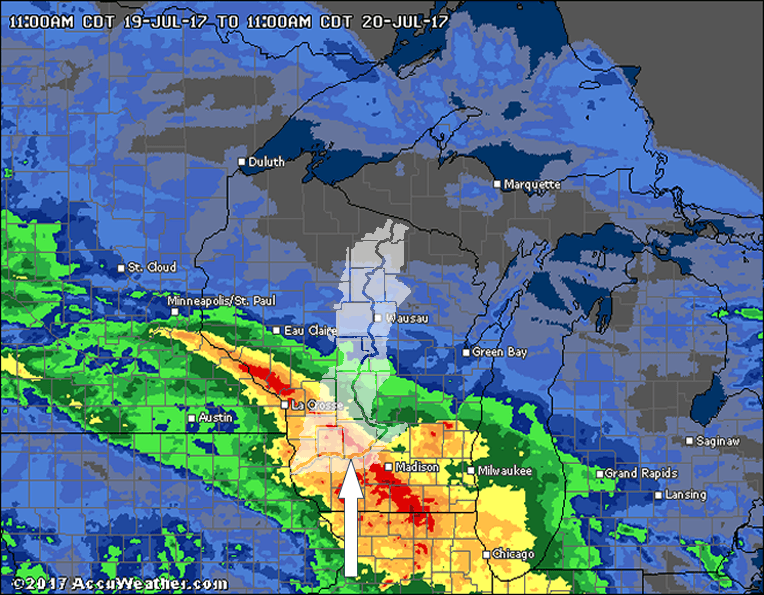 Quick update - water levels will drop substantially in 2 days leaving us tons of sandbars. Hopefully they'll stay like that but we've got 50/50 chances of storms Tuesday through Friday so if most of those days get significant rain we could have some issues. I don't think it's likely, but certainly possible. Updates will come as the rain starts to fall - no news is good news.
Read More >>

The dam two days upstream at Castle Rock doubled their output a few hours ago.  Trips are still fine, it just means we'll see waters rise a bit on Saturday so fewer sandbars than I initially anticipated.  This mostly means you can expect to share the bigger ones as this is also one of (if not the) busiest weekends of the year. Definitely one of those times where grabbing a nice sandbar earlier rather than later is the best course of action.
Read More >>

You’re probably wondering about all this rain…

If you've got a trip this weekend and you're one of the 95% of our customers that live in Madison, Milwaukee, or Chicago - you're probably swimming through puddles at the moment thinking there's no way canoe trips can go out with this much water. Good news (up here at least), the vast majority of the rainfall has hit locally or just south of the watershed which means it's going to have a minimal effect on river levels in our stretch. We are still fully expecting to put trips out on the substantial number of sandbars popping out of the river. -Ryan [caption id="attachment_1311" align="aligncenter" width="640"]

This weekend is looking great! Sunny and dry with highs in the upper 80s! We've been sold out for weeks and I imagine it's gonna stay that way. Water levels are still high for this time of year but plenty of sandbars out right now and even though we've had a lot of rain locally, the bigger impact is upstream of us and it's been pretty dry there. All of that is to say the number of available sandbars has been stable and should remain so. Should be a great week! -Ryan
Read More >>

Water still higher than normal but we’ve got sandbars

The weather forecast looks great through middle/end of Sunday! Central Wisconsin saw some rain the past couple days so we're about due for a small rise in water levels in the middle of the weekend so you'll want to keep an eye on the edge of your sandbar to make sure it's not getting covered overnight (stick a paddle in the sand at the water line). Although water levels are still higher than normal, even with this rise we'll still be under our threshold to cancel trips. The sandbars will be fewer and smaller but they're there. This is one of the busier weekends of the year so expect to share the larger ones. -Ryan
Read More >>